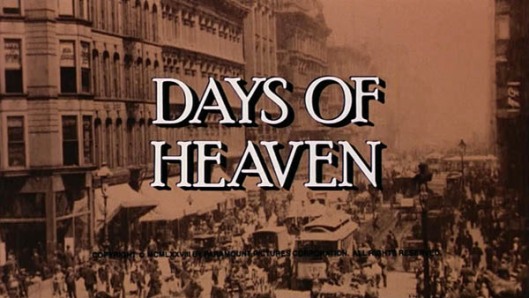 Terrence Malick’s “Days of Heaven” was his second film released in 1978, after a superb debut in 1973 with “Badlands” featuring Martin Sheen and Sissy Spacek, depicting the Starkweather-Fugate murder spree. “Days of Heaven” is a masterly impressionistic evocation of its period, set principally in the Texas Panhandle in 1916 and telling the tale of three itinerant workers who eke out a living at harvest time in the wheat-fields of an isolated rural property.

The film evokes its period beautifully through use firstly of a sepia-toned montage in the opening credit sequence, and then additionally in the wonderfully poetic use of music, including Camille Saint-Saens haunting “Carnival of the Animals: Aquarium” (which has symbolic meaning and is a repeated musical motif in the film), Leo Kottke’s 12 string guitar pieces (reflecting turn of the century Americana) and Ennio Morricone’s perfectly constructed incidental score lending a wistful, timeless quality to proceedings.  These elements are used to create an elegiac tone and a mood tinged with loss and regret, evoking a sense of a half-recalled memory.

The breathtaking cinematography, credited to Nestor Almendros (but with substantial, under-credited and equally important input from another famed cinematographer in Haskell Wexler), won a deserved Oscar, and reinforces this mood with its extensive use of dawn light and sunset hues muting shadows and tempering the sky’s colour palate to a blank canvas, while silhouetting the protagonists as though in a halo of God’s grace. The farm setting itself, with its seas of grass and wheat, draws inspiration from early 20th century painters, especially Andrew Wyeth’s “Christina’s World”, while the gothic mansion starkly rising out of the flat plain surrounding it echoes Edward Hopper’s “House by the Railroad”, a work that was also used for the Bates’ house to chilling effect in Alfred Hitchcock’s psychological thriller, “Psycho”. 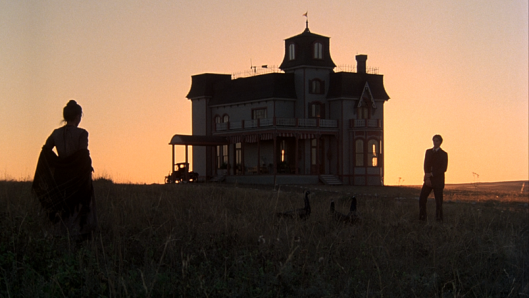 The narrative revolves around the story of a brother (“Bill”) and sister (“Linda”), played by Richard Gere and Linda Manz respectively, and his lover (“Abby”), played by Brooke Adams. The down-on-their-luck trio catch a ride on a train headed south, hoping to gain work at a farm in the distant Texas prairie during harvest time. Bill and Abby decide to pose as brother and sister, to avoid the gossip of the other workers, as well as any social recriminations of being unmarried lovers in such a close knit community. Once there, however, they learn that the Farmer (Sam Shepherd), the owner of the vast 20,000 acre property, is dying and has only been given 12 months to live. Bill convinces Abby that the path to deliverance from their crushing poverty is to ingratiate herself to the dying farmer, and then to marry him in the hope of eventually inheriting his wealth. This love triangle soon unleashes a sequence of calamities of biblical proportions, and results in tragic consequences for those involved. 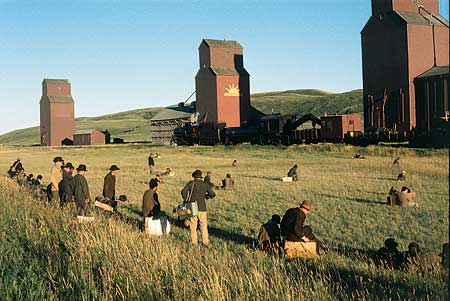 The action begins in the industrial squalor of pre-WW1 Chicago, where Bill is first seen shoveling coal into a furnace in a steel foundry. Amongst the deafening noise of industry a verbal disagreement ensues, with a violent altercation leaving the foreman dead and Bill fleeing into the smoky haze and shadows as he makes his escape. The Fire symbolism of the molten metal of the steelworks reflects Bill’s elemental character, being narcissistic (witness his flamboyant dress compared to those around him), impulsive and hot-tempered, while also foretelling the path of destruction Bill has set out upon, and with conflict and violence destined to be repeated in the denouement of the film.

Abby is first seen on her haunches scavenging amongst refuse beside a small polluted stream in a tip, making it clear that these are people barely subsisting at the bottom of the social scale. The Water symbolism also reflects Abby’s amoral character, flowing on in life following the path of least resistance in spite of man’s futile attempts to contain her.  At first glance, Abby has a certain rustic beauty, but her face is more elfin than stunningly beautiful, with her mouth somewhat downturned at the corners and her imperfect skin, slightly scarred in keeping with her downtrodden existence. She is still sufficiently attractive, however, to be believable having two men vie for her affections. 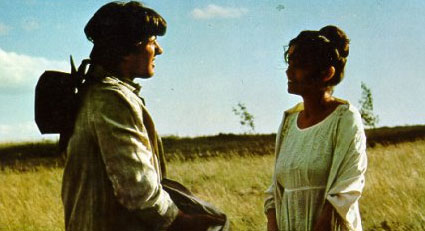 The narrator of the piece is Linda, and it is through her jaded perspective that much of the action is filtered. Malick masterfully utilizes her raspy, clipped vocal inflections, delivered with an air of utter resignation in a flat monotone, her accent and attitude suggesting she is likely to have been an uneducated, New York working class street urchin, perhaps originally one of the teeming masses of immigrants who landed at Ellis Island in search of the American Dream. Her speech, which seems entirely authentic, is suggestive of a young girl who has knocked around on the fringes of society and moved from place to place, never breaking out of the cycle of poverty and deprivation. Yet her character is still able to espouse such optimism at times, while being trenchantly observant in a simplistic way at others. We sense that her perspective has been muted through her past experiences, with her survival instinct causing her to remain strangely detached emotionally from the dramatic events around her.

Linda is symbolic elementally of Earth, able to ultimately resist the forces applied to her externally, but molded and weathered and eroded by these insults and the events as they transpire. To reinforce this notion, we first see her pruning and planting flowers, and later she talks of becoming a “mud doctor, checkin’ out the earth underneath”. Malick at times shows her to be boyish and plain, while at other times she is shot in the firelight with an almost luminous beauty, suggesting an inner strength and admirable spirit that supersedes her outward physical appearance. Her resilience will allow her to survive as she has been strengthened by her travails, scarred by the hard times she has endured, but steeled against those still to come in spite of her fractured innocence. 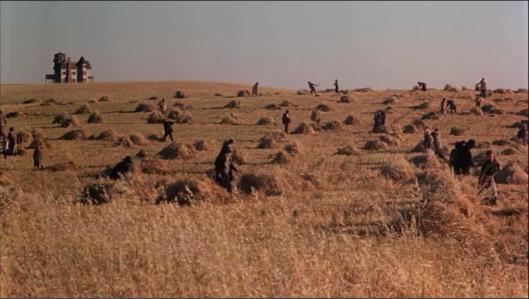 The Farmer is the fourth element in the film, representing Air he is often shown on the roof of his mansion tinkering with his wind instruments.  Like the wind he is ephemeral, a man with a terminal illness who has been alone in his life having no family and never having had a relationship with a woman prior to Abby and Bill’s arrival. Shepherd plays the Farmer with awkward and understated charm, befitting the character who is unused to human passion and intimacy but who eventually wins the love and loyalty (though not completely) of a woman who initially marries him out of convenience.

“Days of Heaven” is a visual tone poem, with the story told in a dazzling kaleidoscope of imagery rather than driven directly by plot or dialogue, the latter of which is deliberately minimalist, often delivered in hushed and muted tones. The story is advanced symbolically through inferences and implications rather than elaborated openly. In the first half of the film, the workers are shown enveloped in the natural world, labouring tirelessly under limitless skies and camping under the stars in contrast to the industrial squalor of city life. They snatch transient moments of joy in the passing of a train, the fiddler playing around the campfire, swapping tales in the moonlight, the blues harmonica and washboard playing and shuffleboard dancing of the negro workers.

There are other subtle nuances that are similarly impressive and linger in the memory, best exemplified perhaps by the point of view shot of the Farmer as he watches Abby and Bill sitting together in the gazebo, the sheer curtains flashing across silhouetting the pair so that they appear to kiss, or perhaps it is merely a trick of the eye as the drape flutters in the wind bringing their shadows together? We cannot be certain given that the view is fleeting and partially obscured, but it is enough to further arouse the Farmer’s jealousy as he clearly begins to assume the worst. Shortly thereafter, he sees the pair talking near the barn, and then exchanging a brief caress whilst he watches unseen from the tower. Initially, we see the despairing look on the Farmer’s face as the full realization hits him that he has been deceived, and then Malick firstly cuts back to the couple as they part, before then returning to the tower, now empty except for the weathervane which is twirling madly.

In the penultimate scene and climax of the film, the elements of the Air (represented by the locust plague) and Fire (the conflagration that accidentally erupts) collide destroying all that both men have coveted, and eventually resulting in their respective demises.  The locust plague and fire suggest the wrath of God at the affront of two men trying to simultaneously possess the same woman, thereby upsetting Nature’s order. It also echoes the Genesis tale of Abraham and Sarah posing as brother and sister, with Pharaoh coveting Abraham’s wife and eventually unleashing God’s vengeance.

Among a myriad of startling images depicted in the film, perhaps the most arresting is that of a steam tractor emerging from the flames like a monstrous otherworldly beast in the apocalyptic fire that eventually destroys the farm, a clear reference to the impact of mechanized society upon the natural world. In addition, the locusts that descend upon the farm are shown in extreme close up devouring the wheat voraciously, and then are seen to rise en masse into the sky in a swirling vortex of destruction.  A further example of Malick’s use of symbolism is when the Farmer has been stabbed and lies dying in the smoking ruins of his property, he looks up to see a red and black plume of smoke billowing over white horses, suggesting his awareness of his imminent path to the afterlife.

That is not to say that “Days of Heaven” is a didactic, self-consciously artistic or self-indulgent film. Analyzing the symbolic devices used in the film does little justice to the subtlety of the delivery, being represented visually in brief flashes of imagery without resorting to enunciating any overt message. Malick has fashioned a morality tale that doesn’t moralize, utilizes religious allusions without preaching, and depicts the perils of industrialization without dwelling upon or emphasizing it. He clearly has a social conscience agenda, yet the Farmer, an obvious figure of capitalism, is portrayed in an entirely sympathetic fashion, being victimized by Bill’s immoral plan to profit from his untimely death. Malick eschews polarizing his characters as good or evil because, as Linda states most succinctly- “Nobody’s perfect. There was never a perfect person around. You just have half-angel and half-devil in you.”

While clearly not a film for all tastes due to, among other things, its elliptical format, the absence of dialogue cues and the lack of the anticipated conventions most moviegoers have been trained to expect of American cinema, Days of Heaven is an immersive cinematic experience that presents a child’s eye view of the adult world, while subtly evoking themes and ideas represented by a pivotal era in American history, and illuminating the futility of the machinations of man in the face of the power and majesty of Nature. The final shots are of Linda, the survivor, walking down a railroad track with her friend. Linda says in voice over- “This girl, she didn’t know where she was goin’ or what she was goin’ to do. She didn’t have no money on her. Maybe she’d meet up with a character. I was hopin’ things would work out for her. She was a good friend of mine”.